Microfluidic Control of the Internal Morphology in Nanofiber-Based Macroscopic Cables

Interest in macroscopic cables consisting of assembled nanofibers has recently increased in the field of materials science and synthetic chemistry. We demonstrated that the nanofibers in the cables was able to be oriented parallel or perpendicular to the longitudinal axis by regulating the fluidic velocities of the core and sheath flows in coaxial microfluidic devices (nanofiber is a fibrous material with nanometer size, nanometer = 0.000000001 meter). These controlled cables exhibit a remarkable difference in their electrical conductivity and also mechanical properties that depend on their morphology. As our study considers only the fluid flow of nanofiber suspensions, this method is applicable to a variety of anisotropic materials such as fibers and tubes, and can be used to enhance the resultant physicochemical properties.

Supramolecular self-assembly is important in biology and materials science as a functional elements in tiny (nanometer-to-micrometer) scales. It is generally difficult to construct macroscopic supramolecular structures, as the interactions between constructing elements are too weak. We demonstrate a method to fabricate meter-long supramolecular strands by encapsulating them in robust polymer gels using a microfluidic channel. The strands are self-assembled and aligned under the laminar flow conditions. Their mechanical strength was sufficiently high to allow their patterning onto a substrate, bridging between pillars on a centimeter scale, and use as reaction vessels for synthesizing an insoluble polymer. This simple technique demonstrates a universal approach for fabricating and utilizing macroscopically aligned supramolecular materials for future technological applications such as on-demand printing of organic electric circuits and flexible sensors. We believe that this approach represents a major advance in the realization of large-scale supramolecular structures with defined shapes, including one-dimensional coils, two-dimensional fabric sheets, and three-dimensional constructs. 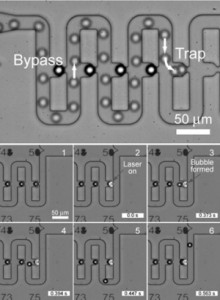 Dynamic microarrays hold great promise for advancing research in proteomics, diagnostics and drug discovery. However, this potential has yet to be fully realized due to the lack of reliable multifunctional platforms to transport and immobilize particles, infuse reagents, observe the reaction, and retrieve selected particles. We achieved all these functions in a single integrated device through the combination of hydrodynamic and optical approaches. Hydrodynamic forces allow simultaneous transportation and immobilization of large number of particles, whereas optical-based microbubble technique for bead retrieval gives dexterity in handling individual particles without complicated circuitry. Based on the criterion derived in this paper, the device was designed, and fabricated using standard photolithography and soft lithography methods. We examined the dynamics of bubble formation and dissipation in the device, and parametric studies revealed that higher power settings at short intervals were more efficient than low power settings at longer intervals for bead retrieval. We also demonstrated the capabilities of our device and its potential as a tool for screening methods such as the “one-bead-one-compound” (OBOC) combinatorial library method. Although both approaches, hydrodynamic confinement and optical-based microbubbles, are presented in one device, they can also be separately used for other applications in microchip devices. [Download the movies from PNAS website] 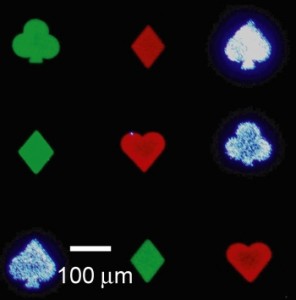 This paper describes a method for high resolution and selective patterning of proteins using a patterned parylene film and PDMS microchannels. Solutions containing desired materials are delivered through the microchannels to the patterning spots where the parylene film is perforated in a desired pattern. Proteins are patterned on a planar substrate after being immobilized on the spots, and subsequently both the PDMS and parylene layers are peeled off. Using this method, fine patterns of bovine serum albumin (BSA) in arrays of 20 μm × 20 μm spots at 2 μm intervals were achieved. Selective patterning of multiple fluorescent beads was also demonstrated. This method can be performed under the wet condition, which prevents the drying out of proteins and is useful for selective protein patterning with minimal nonspecific binding on the undesired area.

This paper describes an electrofusion device for controlling the precise moment of fusion between droplets by applying an electric field. This device allows (i) accurate determination of the start of chemical/biological reactions, (ii) minimum contact of reactants with channel walls–eliminating surface absorption problems, (iii) easy fabrication and (iv) continuous observation of initiated reaction. We demonstrated the fusion of beta-galactosidase and fluorescein di-beta-D-galactopyranoside (FDG) droplets, and observed the enzymatic reaction using fluorescence microscopy. In addition, sequential fusion of pico-litre droplets was also accomplished. 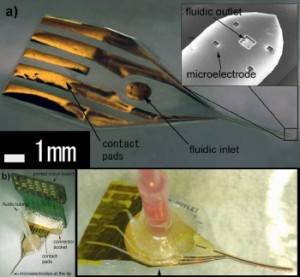 This paper describes the fabrication technology and characterization of Parylene neural probes containing fluidic channels for delivery of small amounts of drugs into biological tissue as well as neural recording. We present a first attempt to realize such neural probes by micromolding and thermal bonding of Parylene. Compared to the common fabrication method, where a sacrificial photoresist layer is sandwiched between two Parylene layers, the major advantages of this process are, that the time consuming photoresist dissolution is omitted, and that the adhesion between the Parylene layers could be improved. The electrodes were characterized by impedance measurements, in which an impedance sufficiently low for neural recording was observed. Fluidic injection experiments with the microchannel have shown that nanoliter volumes can be injected. 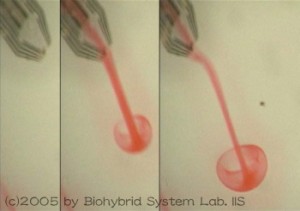 The fluidic channel in the flexible probe has three functions: (i) to inject chemicals into the tissues, (ii) to measure the neural activities from the tissues, and (iii) to improve the mechanical stiffness of the probe by filling the channel with a solid material. A 10-microm-thick microfluidic channel was embedded into the probe by using sacrificial photoresist patterns. Polyethylene glycol (PEG), which is solid at room temperature and dissolves when in contact with water, was used to fill the channel and increase the stiffness of the probe before insertion into the tissue. The impedance of the electrode inside the fluidic channel was around 100 kOmega at 1 kHz when the channel was filled with saline solution. We were able to insert the probe into a rat’s brain and measure the neural signals with the electrode.

A 3D flexible multichannel microprobe array was designed, fabricated and tested. Since each probe had several recording pads, the probe array could be used to measure neural activity at various depths in the brain. They were batch fabricated with interconnections, using a specific folding process to fold the planar probe structures. This flexible probe array was inserted into a rat’s brain without fracturing and was successfully used to measure neural signals. 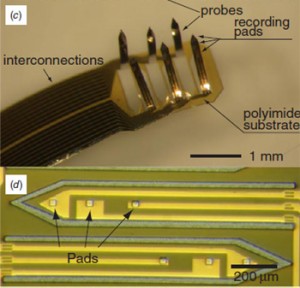 A radio frequency (RF) telemetry system with a shape memory alloy microelectrode was designed and fabricated. The total size and weight are 15 mm x 8 mm and 0.1 g, respectively. Since the telemeter is small and light enough to be loaded on a small animal such as an insect, the system can be used for the neural recording of a freely moving insect. The RF-telemeter can transmit signals by frequency modulation transmission at 80-90 MHz. The transmitted signals can be received up to about 16 meters away from the telemeter with a high signal-to-noise ratio. The neural activity can be detected without attenuation by using an instrumentation amplifier with its input impedance set to 2 Mohms at 1 kHz. The telemeter was loaded on a cockroach and the neural activity during a free-walk was successfully measured through this telemetry system.