MEMS and microTAS technologies can be powerful tools when performing high-throughput,and high sensitive analysis with extremely small amounts of solution. When confined in a small volume, chemical reactions are easily detectable by large changes in the concentration of products; thus preparing micro-sized vessels (including W/O emulsions, liposomes) by these technologies is getting important not only for single molecules and single cell analysis but also for an artificial cell assembly.

We proposed a “Blowing Vesicles” method: a preparation method of lipid vesicles inspired by forming soap bubbles from a soap film. In the method, lipid vesicles are blown out of the pre-formed bio-functional planar lipid membrane, directly encapsulating ejected materials. This method allows us to prepare uniform-sized vesicles in a short time, without post-processing. A planar lipid bilayer membrane (1×1 mm2), where membrane proteins could be reconstituted, was formed vertically by contacting two water phases surrounded by an organic solvent that contained phospholipids. A fine capillary jet nozzle was brought near the membrane, and a short pulse jet flow was created by the brief opening of the micro dispenser’s electromagnetic valve located between an air compressor and a nozzle. When the jet was applied, the membrane deformed and stretched significantly, and the neck of the stretched column was pinched off. Satellite vesicles were also generated occasionally. This process could be repeated to form a number of vesicles. The most important advantage in this method is that any materials ejected are directly encapsulated, regardless of their size, concentration, and chemical properties. As a demonstration, we encapsulated Jurkat cells and chromosomes from Hela cell cytosolic extract. While there are still many interesting aspects to be characterized in terms of the mechanism of vesicle formation, we believe the encapsulation of biological materials with this method will be a promising route to artificial cell systems. Blow vesicles! 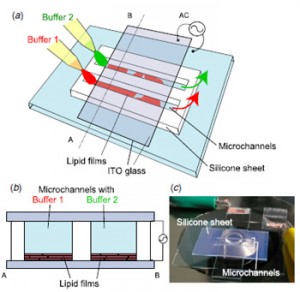 We present an on-chip method to produce various types of giant liposomes using electroformation in microfluidic channels. These channels were sandwiched between glass slides coated with indium tin oxide (ITO) electrodes. Giant liposomes were formed inside the channels by applying an ac voltage. Important characteristics of the obtained liposomes were investigated quantitatively. We found that 54% of the liposomes produced by electroformation had diameters exceeding 10 μm and that 90% of the liposomes did not enclose extra liposomes inside themselves. Using two microfluidic channels, we found that giant liposomes with nano/micrometre- sized materials encapsulated were formed simultaneously on a chip. 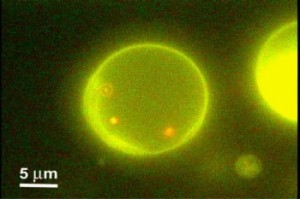 We propose an original approach to handle submicrometer-sized biological or inorganic materials in microfabricated devices for micro total analysis applications. Cell-sized liposomes were utilized as containers for nanoparticles, green fluorescent proteins, or DNA and handled within a microfluidic chip. Due to the micrometer size of these liposomes, their detection could be achieved by conventional optical systems. Moreover, liposomes are hardly sensitive to Brownian motion; their trapping or transportation is thereby made easy with electrostatic-based techniques, for instance, developed the past few years for cells and particles. Encapsulated materials were confined for long durations with respect to the diffusive scale time, and the liposome membrane provided excellent protection from the outside environment, inhibiting undesirable interactions. A microfluidic device consisting of a flow cell covering an array of asymmetric electrodes allowed us to convey readily liposomes by the AC electroosmosis effect. We also assessed the electrofusion of liposomes between micromachined electrodes, opening up controlled initiation of reaction inside these containers; it was exemplified by fusing differently colored liposomes. We observed that a large fraction of the liposomes fused for electric field intensity around 6 kV/cm. Applications ranging from ultrasmall biomimetic reactors to large-scale drug delivery or cell labeling can be envisaged.

A microfluidic device for electrofusion of biological vesiclesm

This paper reports a microfabricated device with high aspect-ratio electrodes and low power consumption for the electrofusion of liposomes and cells. The applications may range from gene transfection or cell tracking to biophysical studies of membrane proteins. The device consists of 250 microm thick silicon electrodes bonded to a glass substrate and covered by a PDMS-coated glass slide. Liposomes were first aligned by AC voltage at 300 kHz and then fused with short DC pulses. The fusion yield can reach 75% and is globally better for liposome diameters larger than 10 microm. The encapsulation of microbeads inside liposomes has also been demonstrated and opens up the route towards fusion-based delivery of artificial microstructures into cells. 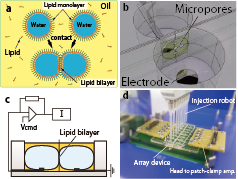 Although ion channels are attractive targets for drug discovery, the systematic screening of ion channel-targeted drugs remains challenging. To facilitate automated single ion-channel recordings for the analysis of drug interactions with the intra- and extracellular domain, we have developed a parallel recording methodology using artificial cell membranes. The use of stable lipid bilayer formation in droplet chamber arrays facilitated automated, parallel, single-channel recording from reconstituted native and mutated ion channels. Using this system, several types of ion channels, including mutated forms, were characterised by determining the protein orientation. In addition, we provide evidence that both intra- and extracellular amyloid-beta peptide fragments directly inhibit the channel open probability of the hBK channel. This automated methodology provides a high-throughput drug screening system for the targeting of ion channels and a data-intensive analysis technique for studying ion channel gating mechanisms. Ryuji Kawano et al., Scientific Reports, 2013

We developed a highly reproducible method for planar lipid bilayer reconstitution using a microfluidic system made of a polymethyl methacrylate (PMMA) plastic substrate. Planar lipid bilayers are formed at apertures, 100 microm in diameter, by flowing lipid solution and buffer alternately into an integrated microfluidic channel. Since the amount and distribution of the lipid solution at the aperture determines the state of the lipid bilayer, controlling them precisely is crucial. We designed the geometry of the fluidic system so that a constant amount of lipid solution is distributed at the aperture. Then, the layer of lipid solution was thinned by applying an external pressure and finally became a bilayer when a pressure of 200-400 Pa was applied. The formation process can be simultaneously monitored with optical and electrical recordings. The maximum yield for bilayer formation was 90%. Using this technique, four lipid bilayers are formed simultaneously in a single chip. Finally, a channel current through gramicidin peptide ion channels was recorded to prove the compatibility of the chip with single molecule electrophysiology. 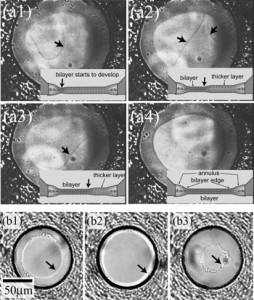 Planar lipid bilayers are used for functional studies of ion channel proteins using electrophysiological techniques. We have been developing a plastic micro-fluidic device for the reconstitution of planar lipid bilayers and electrophysiological recordings toward a “membrane protein chip” for high-throughput screening. In the previous report [Suzuki, H., Tabata, K.V., Noji, H., Takeuchi, S., 2006. Highly reproducible method of planar lipid bilayer reconstitution in polymethyl methacrylate microfluidic chip. Langmuir 22 (4), 1937-1942], we presented the method and device in which the reproducibility of planar lipid bilayers reached 90%, and multiple bilayers were formed simultaneously. In this communication, we show that our device has excellent electric properties suitable for ion channel analysis down to single molecular level. Additional aspects on the optical accessibility and controllability on lipid bilayer formation are also presented. 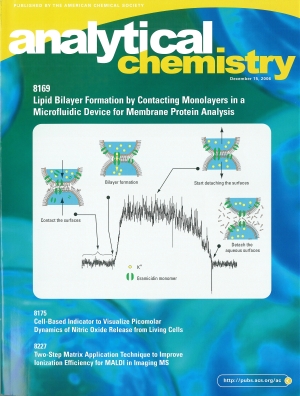 Artificial planar lipid bilayers are a powerful tool for the functional study of membrane proteins, yet they have not been widely used due to their low stability and reproducibility. This paper describes an accessible method to form a planar lipid bilayer, simply by contacting two monolayers assembled at the interface between water and organic solvent in a microfluidic chip. The membrane of an organic solvent containing phospholipids at the interface was confirmed to be a bilayer by the capacitance measurement and by measuring the ion channel signal from reconstituted antibiotic peptides. We present two different designs for bilayer formation. One equips two circular wells connected, in which the water/solvent/water interface was formed by simply injecting a water droplet into each well. Another equips the cross-shaped microfluidic channel. In the latter design, formation of the interface at the sectional area was controlled by external syringe pumps. Both methods are extremely simple and reproducible, especially in microdevices, and will lead to automation and multiple bilayer formation for the high-throughput screening of membrane transport in physiological and pharmaceutical studies. 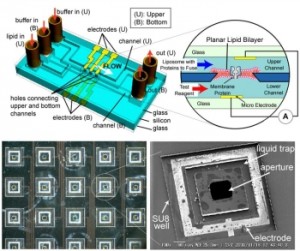 A planar lipid bilayer which is widely used for the electrophysiological study of membrane proteins in laboratories is reconstituted using a micro-fluidic system, in a manner that is suitable for automated processing. We fabricated micro-channels on both sides of the substrate, which are connected through a 100-200 microm aperture, and showed that the bilayer can be formed at the aperture by flowing the lipid solution and buffer, alternately. Parylene coating is found to be suitable for both bilayer formation and electric noise reduction. Future applications include a high-sensitivity ion sensor chip and a high-throughput drug screening device.